Ancestral apple cider vinegar is a virtual storehouse of active nutritional elements, which have been neither filtered nor pasteurized, to preserve all their benefits. A single teaspoon of Ancestral apple cider vinegar contains dozens of nutrients such as vitamins, essential amino acids, fiber-rich pectin, friendly bacteria (mother of vinegar), digestive enzymes, antioxidants, minerals and numerous trace elements.

A dash of apple cider vinegar adds new flavor to your favorite dressings and mayonnaise. Ancestral vinegar keeps your marinades and fine herbs fresh, heightens the nutritional value of foods and tenderizes meats. It even adds a sweet and sour flavor to Chinese food. It is a welcome addition to pastry recipes, and it adds life to certain types of cakes and muffins. In summary, the appetizing, digestive, aromatic and disinfectant characteristics of Ancestral vinegar make it a truly indispensable ingredient in all kitchens.

In fact, you can eliminate white vinegar from all of your recipes. White vinegar easily holds its own when it comes to cleaning and general maintenance, but it contains no nutritional value and should be used for household chores exclusively. By replacing it with Ancestral apple cider vinegar, you’ll be setting a course for some pleasant discoveries. 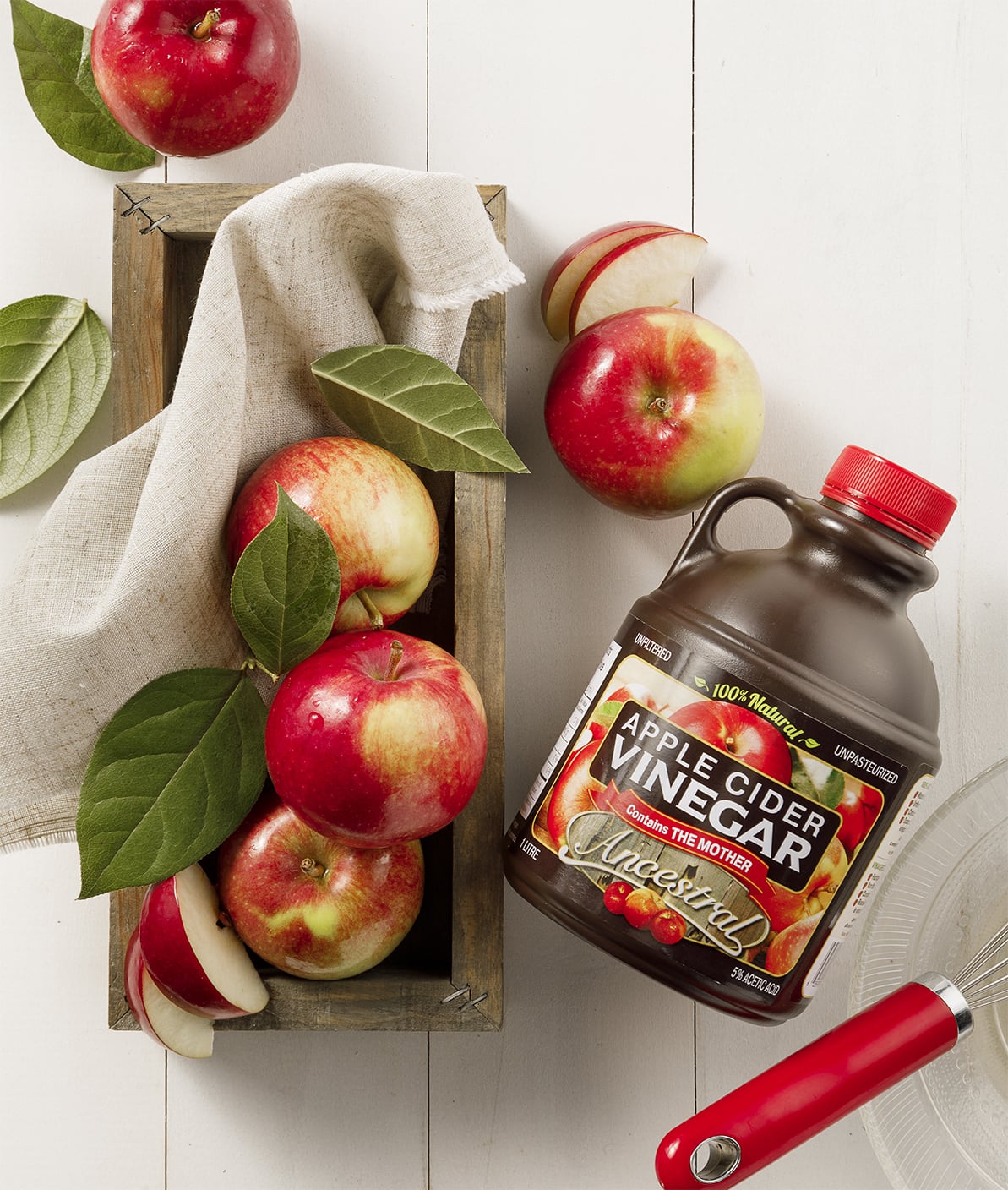 "The Mother of Vinegar"

The “mother of vinegar” refers to the gelatinous deposits which form in the bottom of the container when alcohol transforms into vinegar. This natural change is induced by bacteria. The resulting gelatinous mass tastes pleasant, is perfectly edible and often used to stimulate production of a new vinegar, hence the name mother of vinegar. Today, most producers pasteurize their product before bottling, a process which prevents the formation of the mother in the bottles.

Next time you notice the cloudy appearance and gelatinous deposits in Ancestral apple cider vinegar, remember that they confirm the presence of the mother, thus assuring a top quality product that has preserved all of its natural properties.


The mother is very important and must be found in any unfiltered and unpasteurized high quality cider vinegar. Why? The mother contains a friendly bacteria called acetobacter. This friendly bacteria is alive (as in yogurt) and contributes to the health of the intestinal flora and immune system, hence its great virtues.

The mother of vinegar comes in different forms: scrambled appearance, light veil on the surface, small floating filaments, gelatinous formation at the bottom of the container etc. You can safely consume the mother in all its forms to enjoy its health benefits. Every time you use it, you should gently shake the Ancestral vinegar bottle to evenly distribute the mother

The mother of vinegar is good for you

Make Ancestral vinegar your go-to vinegar to which you can add all sorts of new ingredients. You will enjoy unlimited culinary experiences, while consuming a product that preserves all its nutritional values.

Vinegar is an acidic liquid derived from wine, cider, beer or any other lightly alcoholic beverage. It is produced by a process called acetic fermentation (from the Latin word acetum, meaning vinegar). The transformation of alcohol into sour acid is performed biologically by acetic bacteria called acetobacter, found in the air.

Vinegar can be made from almost any sugary liquid. Cider vinegar, however, holds the most beneficial qualities. Systematic production got under way as soon as this became common knowledge.

17th century France gave this industry the royal stamp of approval, thus spreading it around the world. Painstaking experimentation produced a so-called traditional production process that preserves the product’s natural qualities without altering them during production. Cider vinegars which conform best with this method reflect the highest level of quality.

First, the apples are pressed and the juice, resembling clear applesauce is collected; the contents are then left to ferment. During the sedimentation process, the sugar transforms into alcohol at a rate varying from 10% to 12%. This liquid, which has now become cider, is poured into a new fermentation tub where it remains until it has attained an acetic acid degree of 5%.

The above-mentioned process takes place without filtration or pasteurization, and without the addition of any chemical products. The cider vinegar is then bottled in opaque containers, to prevent oxidation caused by exposure to light.

As early as the 4th century BC, Hippocrates incorporated vinegar into his treatments. Much later, in the 15th century, alchemists used vinegar to extract mineral salts. The discovery of vinegar therefore dates back thousands of years. Because vinegar is so easy to make, it can even be produced unintentionally. In fact, it is highly likely that vinegar was originally created accidentally. A batch of fruit juice, left in the open air, transformed into fermented liquid: a precursor to our wines of today. In contact with the air, this underwent a new fermentation process. One taste revealed its sourness, and vinegar was born. Our resourceful ancestors quickly discovered a range of uses for vinegar. These include preserving the freshness, color and firmness of vegetables, conserving fish, etc.

The virtues of this marvelous concoction would soon become known far and wide. Each sugared liquid –wine, beer, fruit juice, etc.–produced a different vinegar. Apple cider vinegar soon made an appearance and quickly gained popularity. Its rich components, vitamins, minerals and enzymes have all strengthened its reputation as a nutritious food.

Vinegar producers’ lack of knowledge is the principle cause of the appearance on the market of lesser quality cider vinegars. Ignorance of the virtues of natural cider vinegar has driven consumers to overlook cider vinegar, with its cloudy appearance and deposits, known as the “mother of vinegar”. Some producers have chosen to clarify and pasteurize the product, which is a mistake. The pasteurizing process requires reheating, which in turn destroys the enzymes and rich minerals that cider vinegar contains, such as potassium, phosphorus, iron, copper and magnesium.

Sign up to our newsletter and receive tons of delicious recipes and handy tricks!